In December 2018, ZERO-SUM, LTD. and TOYOTA InfoTechnology Center Co., Ltd., with the support from the Ministry of Internal Affairs and Communication, JAPAN and in collaboration with Connected Solutions Company, Panasonic Corporation and with approval from the Amdavad Municipal Corporation in INDIA, conducted a demonstration experiment showcasing an emergency vehicle priority system that uses a UHF band based Japanese originated international standard V2X communication technology.

This experiment demonstrated the use of an emergency vehicle priority system in which an emergency vehicle such as ambulance and traffic information display boards communicate with each other through the UHF band using V2X communication technology originating from JAPAN and International standard. This is the first demonstration of its kind in the world on a public road.

Goal of the experiment

This demonstration experiment that uses the application of UHF band V2X communication technology, aims at addressing and solving one of the most important challenge faced by emergency vehicles such as ambulances today, i.e. reaching their destination in the quickest time possible which is sometimes not possible owing to traffic congestion.

This technology prompts traffic information display boards installed on the road to display information of an approaching emergency vehicle. Upon the detection of an emergency vehicle, the display boards will inform motorists on the road to make way for the priority passage of the emergency vehicle, thereby enabling the emergency vehicle to get free passage and reduce the travel time to its destination safely. The demonstration used UHF band frequency for the communication of information, which due to its high penetrability through buildings and natural obstructions and less interference from other devices is the most ideal for urban areas in ASIA where there is a higher urban populace and buildings alongside the roads that are densely populated.

The experiment was conducted on the West Bank of the Riverfront Road in Ahmedabad, which is the capital of the western state of Gujarat in INDIA.
The River front Road runs along the western banks of the Sabarmati River which flows through the center of Ahmedabad City. 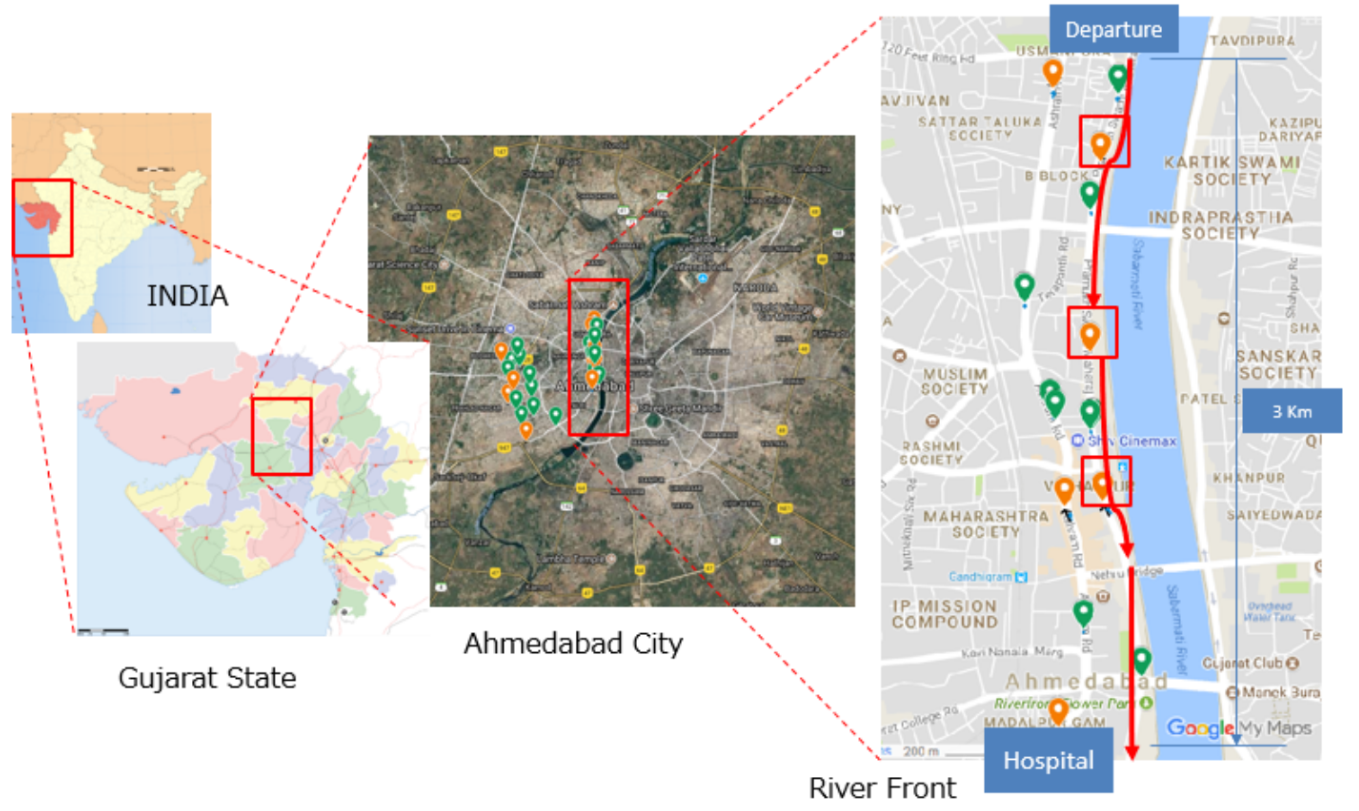 Results of the experiment

In the next phase of the experiment, more methods on how the emergency vehicle travel times can be further shortened will be explored. In addition to studying the effects of the experiment already conducted, further examining and customization of V2X messaging sets will be undertaken basis the local requirements in INDIA. The next deployment will also aim at integrating a signal control system with V2X communication technology so as to provide stoppage free green corridor passage to emergency vehicles. In furtherance, upon completion of the experiment, a study to expand the project to cover other key prominent locations in which we can implement such V2X communication technologies will also be explored.

Role of organizations in this experiment

ZERO-SUM introduced and operates a traffic congestion mitigation system in Ahmedabad city of Gujarat, INDIA. ZERO-SUM is in charge of the experiment component to be undertaken in INDIA for the project titled “Research for the oversea expansion of ITS technologies in Japan” funded by Ministry of Internal Affairs and Telecommunications, JAPAN“. Zero-Sum ITS Solutions India Private Limited, a subsidiary of ZERO-SUM, LTD. is responsible for coordination with Amdavad Municipal Corporation, local traffic police and WPC, and is also responsible for the preparation of the field experiment in Ahmedabad city, INDIA.

TOYOTA InfoTechnology Center Co., Ltd, a subsidiary of Toyota Motors Corporation, focuses on research and development, evaluation of IT technologies and promoting V2X communication technology globally as a part of research and analysis, go-to-market strategies, business model, etc.  TOYOTA InfoTechnology Center Co., Ltd. is also an active member of the project titled “Research for the overseas expansion of ITS technologies in Japan” funded by Ministry of Internal Affairs and Telecommunications, JAPAN, by providing technical views and support for the project

The Amdavad Municipal Corporation is responsible for the civic infrastructure and administration of the city of Ahmedabad which is the largest city in the state of Gujarat, INDIA. Ahmedabad city has a population of 5.6 million people and is the seventh largest city in INDIA. Several Japanese automotive companies in recent years have setup their manufacturing facilities around Ahmedabad City. Ahmedabad city is also one of the first cities selected under the Smart City program implemented by Prime Minister Narendra Modi and has been at the forefront in the implementation of smart technologies for the betterment of its citizens.

It is a standard compiled by the Association of Radio Industries and Businesses, Japan (ARIB) to support safe driving using vehicle-to-vehicle and vehicle-to-infrastructure communication system. The exchanging of information will enable the prevention of traffic accidents and help realize safer driving. The safe driving support services started from Japan and has been in use since 2015.

The WIRELESS PLANNING & COORDINATION (WPC) Wing of the Ministry of Communications, Department of Telecommunications, INDIA is the National Radio Regulatory Authority responsible for Frequency Spectrum Management, including licensing and caters for the needs of all wireless users (Government and Private) in the country. It exercises the statutory functions of the Central Government and issues licenses to establish, maintain and operate wireless stations.

“Research for the overseas expansion of ITS technologies in Japan”

“Research for the overseas expansion of ITS technologies in Japan”, is a research project funded by the Ministry of Internal Affairs and Telecommunications, JAPAN. This project aims to undertake a study of the traffic accident information from several Asian countries and regions & thereafter implement demonstrations of the world standard based Japanese originated V2X technology to achieve improvements in the traffic safety conditions. This research will cover 6 countries and regions for undertaking research on traffic accident information and 3 countries and regions including INDIA for the implementation of V2X demonstrations.